So I'm aggregating my blogs into one spot... Or well 2. One for just writing and one for everything else.

Here is the link for the new blog:

OMG! I really need to get better at updating my blogs better. March is just too damn long for an update! I have been doing a fair amount of crafting in that time and those that follow me on Facebook would have seen the periodic updates on completed projects.

Off the topic of crafting, I've also started working with Heal. Hopefully it will help me free up time to do a lot more of what I love. If you want to free up time as well, click the link below and come join my team.

Sorry it's been so long! I've been working and studying again... I know not a great excuse but it's my one and I'm sticking to it.

Yes I know I'm lazy... Super lazy. I haven't updated since April! I have been busy tho between work and preparing to take on a new Masters degree.

Anyway, I have some projects to share with you all. 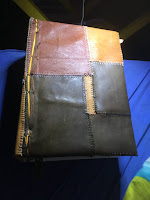 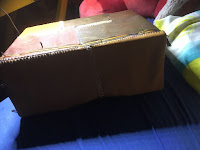 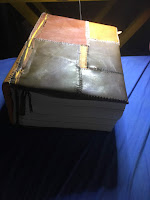 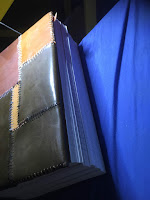 Handbound Leather Book
I used some leather scraps to sew together and cover some heavy-duty cardboard. Then I used looseleaf paper as the pages. It actually hurt a fair bit binding the pages together. I used a combination of a tufting needle and my jeweller's pliers to put it all together. 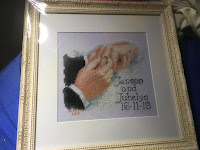 Wedding Piece
This cross-stitched wedding piece was created for one of my oldest friends, Juby. Her wedding was so beautiful and I was glad I could attend it despite the bushfires. Those of you who have been following me for a while will know that for every friend and family member that has gotten married, I've created a wedding piece for. I have as yet to duplicate the same pattern twice. This piece was sold as a kit.

Small Clips
More little crochet clips I made for my sister. She's requested a fair number of items but these were pretty quick to complete while I last visited her. They all have barrette or snap backing. 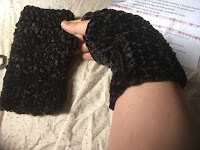 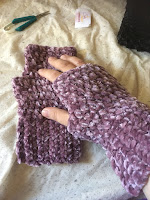 Fingerless Gloves
These are what the majority of my Christmas presents are this year. They've been made with Bernat Velvet yarn. It's a super soft yarn that does feel like velvet once completed. I've lost count how many of these I've made. I haven't completed them all. So far I've completed the black sets and now I'm working through the pink ones.

Last update is about my Etsy shop. It's been deactivated by Etsy and so I'm in the progress of creating a new one on my Wix website. Hopefully, I'll get it completed soon and I'll have better control over what is being sold and how.
at November 29, 2019 No comments:

The Story Behind "The Garden of the Black Roses"

I've always had a fascination for black roses. Often they seem mysterious, sometimes almost in the realm of mythical. A true black rose, not a pseudo-deep red that looks black rose, is almost a rare if not non-existent flower.

It's how I view my life in general sometimes. I'm often in a fantasy world populated by mythical creatures and unusual objects. My imagination is stronger than my reality at times and my dreams can be very vivid.

But I'm no fool. I know that in order to survive, some touch with reality needs to be present. Hence the Garden of the Black Roses was born. The Garden is my imagination is my retreat from the outside world. It is where my wildest thoughts and ideas for the subset projects that are created within congregate.

So what is Soft Firelight Creations?

The imagery of a shop with a soft firelight glow lighting the area was what sparked the name. That imagery in itself was sparked from my crafting chair... Or well, rocking chair. There's something about the stereotypical, knitting by an open fireplace that speaks to me.

So where to from here?

Soft Firelight Creations is going to hopefully become more active over the coming months. I've developed a blogging calendar that encompasses all three blogs. Sometimes, the topic + content will be the exact same between all three, and sometimes the topic will be the same but the content will be tailored more to that project.

My hope is that Monday's will be regular blogging day with the rest of the week being more for random content and updates. We'll see how I go.
at April 01, 2019 No comments:

Email ThisBlogThis!Share to TwitterShare to FacebookShare to Pinterest
Labels: General

Quite a large craft update this time around as these start from about late December last year until now. I held off on updating because I had only a few items finished. Been thinking of only putting up updates when I have 30+ items.

Anyway, to the update! I've grouped them as well since there's a few that came as a group. Now, depending on how long you have followed me, some people know I love puzzles. In particular, I love 3D crystal puzzles.

I did do more than just this one but there was so many that they would take up a page on their own and they really don't class as a craft per se.

They do pose a really good challenge tho. They are probably the most complex of the type of puzzles I tend to do.

I do have a tendency for crafting styled puzzles so things like 3D wood puzzles, Nanoblocks, and Paper Theatre all come under this. The latter two more craft rather than a puzzle.

I've been trying to empty my project pile lately. I've got so many unfinished projects that the pile itself reaches halfway up the wall. In addition to this, I have a number of small kit projects that have been sitting and waiting for a night shift to be done.

Lastly, the Etsy shop is doing well. The Rejected Rabbits seem to be the most popular item at the moment. I have an order to complete and send soon. But below is a custom order. The pattern given to me was for an alien baby but it actually reminds me of Adipose from Dr Who. Let me know what you think. 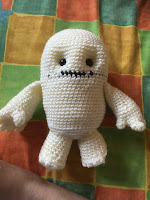